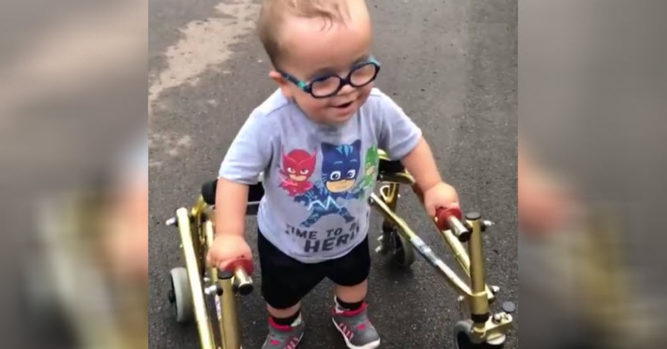 The majority of us grew up in a household where things did not necessarily go wrong. We may have had parents that took care of our needs and brothers and sisters that we got along with for the most part. Sure, there are going to be some problems that occur from time to time in any family but if you are an average family, you were able to get through them without any real difficulty.

That isn’t the case with everyone, however, and sometimes there may be some tragedy that occurs within the family. That is what happened when Roman, a two-year-old boy was diagnosed with spina bifida. He was still in his mother’s womb when the diagnosis took place and his mother was 20 weeks pregnant. It was a difficult thing to break to the mother and father but the doctors did it and it allowed the family to move on.

Roman underwent surgery during that time to help with his movement and his legs as well as his breathing. The doctors warned that he might never walk on his own. That didn’t stop Whitney and Adam, the mother and father, from hoping for the best. They were going to work with their young son and ensure that he got the best care that he could out of life. First, Roman was in chiropractic care and he started using a walker to move around. It wasn’t long before he began using crutches but the video that was captured and shared below shows the excitement he felt when he took his very first steps. It’s hard not to get emotional when you hear him shouting: “I’m walking! I’m finally walking!”

Apparently, I’m not the only one who gets emotional over this video. It has been watched more than 124 million times and now, Roman is loved by millions online and he has his own Facebook page. He and his family are inspirations to other families that are dealing with spina bifida.