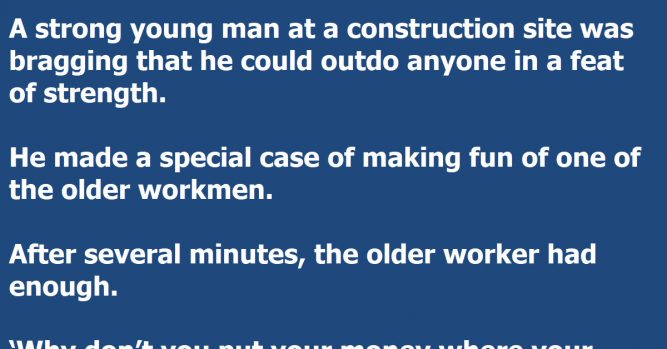 There are times when all of us probably think a little bit more of ourselves than we should. Then again, there are some people who just seem to make it a habit. When we come up against those individuals, we have a few different choices but it basically boils down to either allowing them to get away with it or finding a way to make them eat their words. When a man pushed things a little too far on a construction site, somebody decided to get the better of him and it comes together in a very hilarious joke.

A strong young man at a construction site was bragging that he could outdo anyone in a feat of strength.

He made a special case of making fun of one of the older workmen.

After several minutes, the older worker had enough.

‘Why don’t you put your money where your mouth is,’ he said.

‘ I will bet a week’s wages that I can haul something in a wheelbarrow over to that building that you won’t be able to wheel back.

The old man reached out and grabbed the wheelbarrow by the handles.

Then, nodding to the young man, he said,
‘All right, dumba$s, get in.’