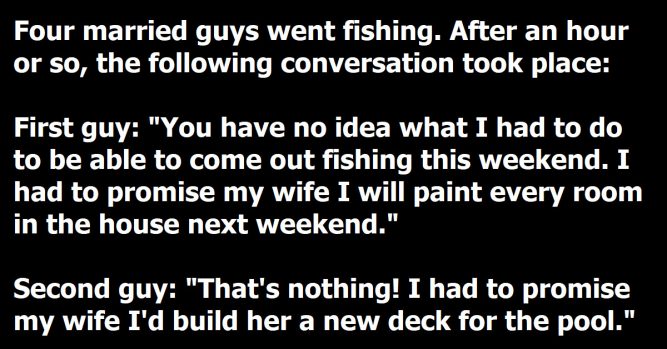 Four men were out fishing and talking about what they had to do to get away for the day. The problem with the conversation was that they were all married. In the back of their mind, they thought about all of the things they would have to do around the house to make up for a day of pleasure, out on the water. Each of them took their turn telling the story but when the fourth guy told his story, I’m sure it turned the other fishermen green with envy.

Four married guys went fishing. After an hour or so, the following conversation took place:

First guy: “You have no idea what I had to do to be able to come out fishing this weekend. I had to promise my wife I will paint every room in the house next weekend.”

Second guy: “That’s nothing! I had to promise my wife I’d build her a new deck for the pool.”

Third guy: “Man, you both have it easy! I had to promise my wife that I’ll remodel the kitchen for her.”

They continued to fish until they realized the fourth guy had not said a word.

So they asked him. “You haven’t said anything about what you had to do to be able to come fishing this weekend. What’s the deal?”

Any cookies that may not be particularly necessary for the website to function and is used specifically to collect user personal data via analytics, ads, other embedded contents are termed as non-necessary cookies. It is mandatory to procure user consent prior to running these cookies on your website.