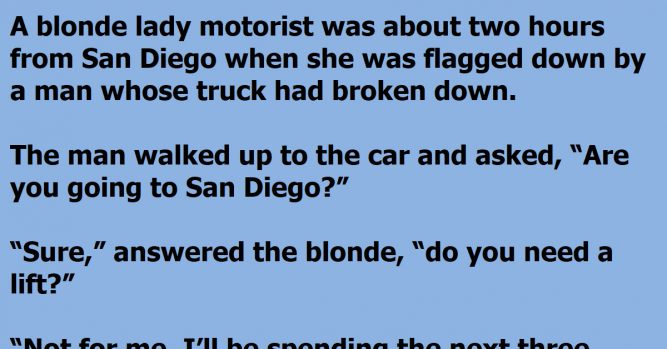 Did you ever notice that there are certain jokes that just seem to get better, each time you hear them? Sure, there are going to be some that you would never want to hear more than once. That is typically how most of us would feel about a ‘dad joke’ but there are others that are just classics. We might have heard them in the past but when we hear them again, we laugh like it was the first time we heard it. That is the case with this joke, which is sure to crack you up.

A blonde lady motorist was about two hours from San Diego when she was flagged down by a man whose truck had broken down.

The man walked up to the car and asked, “Are you going to San Diego?”

“Sure,” answered the blonde, “do you need a lift?”

“Not for me. I’ll be spending the next three hours fixing my truck. My problem is I’ve got two chimpanzees in the back that have to be taken to the San Diego Zoo. They’re a bit stressed already so I don’t want to keep them on the road all day. Could you possibly take them to the zoo for me? I’ll give you $100 for your trouble.”

So the two chimpanzees were ushered into the back seat of the blonde’s car and carefully strapped into their seat belts, and off they went.

Five hours later, the truck driver was driving through the heart of San Diego when suddenly he was horrified! There was the blonde walking down the street, holding hands with the two chimps, much to the amusement of a big crowd.

With a screech of brakes, he pulled off the road and ran over to the blonde. “What are you doing here?” he demanded, “I gave you $100 to take these chimpanzees to the zoo.”

“Yes, I know you did,” said the blonde. “But we had money left over so now we’re going to Sea World.”