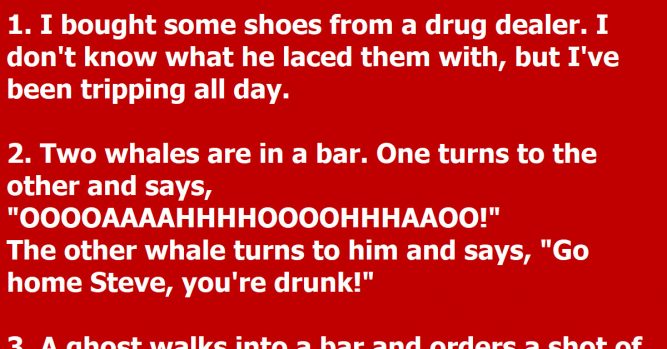 I think that all of us would agree that it is enjoyable to have a good laugh every once in a while. That being said, the type of joke that makes us laugh is going to differ from one person to another. Some people like to keep things simple but others enjoy hearing more of a long-winded joke that is more like a story that just so happens to have a humorous climax. The 20 jokes that are listed below are not only hilarious, they are also proof that a joke doesn’t need to be long to be funny.

I bought some shoes from a drug dealer. I don’t know what he laced them with, but I’ve been tripping all day.

Two whales are in a bar. One turns to the other and says, “OOOOAAAAHHHHOOOOHHHAAOO!”
The other whale turns to him and says, “Go home Steve, you’re drunk!”

A ghost walks into a bar and orders a shot of vodka. The bartender says “Sorry, we don’t serve spirits here.”

A dyslexic man walked into a bra.

Why can’t you tell a kleptomaniac a joke?

I’ve taken up speed reading. I can read “War and Peace” in twenty seconds. It’s only three words but it’s a start.

Two gold fish are in a tank. One looks at the other and says, “You know how to drive this thing?!”

What did the cowboy say at the German auto show?

What do you call a nun in a wheelchair?
Virgin Mobile.

Two cows are in a field, one says “mooooo!”, the other says “that’s what I was going to say.”

What did they give the guy who invented the doorknocker?

What is red and bad for your teeth?
A brick.

A termite walks into the bar and asks, “Is the bar tender here?”

What do you call a fake noodle?
An impasta.

What do you call a bear with no teeth?
A gummy bear.

What do you call a cow with no legs?
Ground beef.

I have an EpiPen. My friend gave it to me when he was dying, it seemed very important to him that I have it…